So, day 4 was a bit different to the 3 that preceded it… Day 4 was a day we didn’t really have too much planned, so we just took it easy, and did a few bits and bobs. It was a nice change of pace from the crazy amount of stuff we’d managed to fit into our first few 24-hours in Tokyo. So, I’m sure you’ll be pleased to hear, this post shouldn’t be too long… 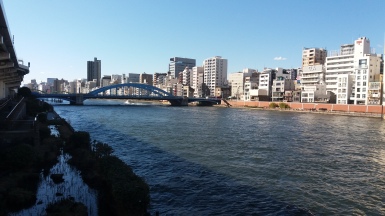 I feel like all my posts regarding this trip start the same “It was a pretty lazy morning….”, and shock horror, this one is no different. We decided to venture somewhere else for breakfast (only next door to our trusty bakery), and it wasn’t worth it. We ended up making a pit-stop at Tom Tom’s anyway before heading over to the other side of the bridge. We’d managed to finish up the disposable camera we’d bought and decided to try and get it developed before we moved onto Seoul. So, before getting on the metro we went back to the little shop on the corner we’d bought it from and swapped it for our pick-up slip.

We travelled the few short stops along our trusty Ginza line and came up into the (cold) sunshine of Ueno. We headed straight for the park as this seemed to be the main area we’d heard and read about at this metro stop. As we stepped into the park we were met by a crowd that had formed around a pretty sharply dressed man in a suit. We joined the horde of people and watched as the man put on one hell of a performance. He wasn’t a juggler, he wasn’t a singer, and he wasn’t a street magician. I’m not sure what you’d call him, just a END_OF_DOCUMENT_TOKEN_TO_BE_REPLACED

a feeling of reverential respect mixed with fear or wonder.

Awe is such a perfect word to write about and think of right now, and that definition explains it all. I used to think I was in awe of travellers, explorers and globetrotters, and I guess I still am. But now I think I’m more in awe of the countries themselves, not the people landing on the airport runway. And when I say countries, I mean everything that they contain; the culture, the locals, the food, the sights, the unique nature and environment of each place. I don’t want to just repeat the definition, but as I said, it sums it up so perfectly. I’m filled with wonder, with a small, but very real, spark of fear, of the many many different countries I’ve not yet been privileged enough to step foot in. The fear and wonder is one of those crazy mixed up emotions that fills me up, right to the brim, but it’s so intertwined with such a strong raging excitement, that it’s hard to contain. I feel so passionately about this and one of my favourite words END_OF_DOCUMENT_TOKEN_TO_BE_REPLACED