It was a long and bumpy journey from Sapa to Hanoi in the dark. I spent it reading, listening to music, messaging friends and just lying there. We got dropped off in Hanoi again at around 9:30pm, and walked to our 2nd home: Central Backpackers – Original. We were both a bit grump and snappy with each other (definitely hangry). I messed up the directions walking back to the hostel, and Alice kept flapping the towel which made the lift doors open again, and again, and again before I snatched the towel off her. We dumped our bags, gave each other a look, and agreed we needed to go get some food before we lost it with each other. We went to a place just down the road and had a much needed burger and chips before going back to room #7 and getting some sleep (as much as we could with the worlds loudest snorer in our room).

We woke up, grabbed some breakfast (back to our standard of eggs and bread), and then chilled in the room until around 10:30am (I felt the need to write down in my journal that I brushed my teeth downstairs in the lobby area… Again, so much pointless Parker!) At half 10, Nathan, the hostel rep who had done the Halong Bay thing with us, came to the hostel to round up the troops for the free walking tour. (This hostel was definitely one of the most helpful and handy hostels we’d stayed at. Free towels, free breakfast (even when leaving super early), a warm welcome every time, free beer hour, great Halong Bay trip, free walking tour, reserving a table for us at the Indian, and helping us book and sort out busses.)

There were quite a lot of us (maybe 20-30) on the walking tour, and Nathan led us a few doors down to a small hidden temple which was roughly 900years old and one of the oldest standing buildings in Hanoi. We couldn’t go in if we were wearing shoes or had our shoulders or knees on show (standard practice). So most of us just stood in the little opening and looked at it from the outside. 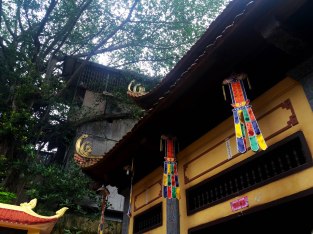 Next up was the huge cathedral. “What do you guys think? Do you like it? Think it’s beautiful? Huge? Awesome?” Nathan asked us, we all responded with nods of agreement… “Well, you’re going to feel real bad about that when I tell you it’s history!”  St Joseph’s Cathedral was built on top of a Buddhist temple when the French came to colonise the country. Christianity was forced upon the local people and only a few still practice it now. When they read or quote the bible, they still do so in French, crazy!

After a walk inside and around the cathedral, we continued out in the drizzle to wander around the lake again while Nathan told us the legend of the King who found some gold/metal in the lake thanks to the help of a giant turtle. This (somehow) led to the Vietnamese winning the war against China, so, as a thank you and a tip of the hat to the turtle, he built a pagoda in the lake in the same spot he found the metal/gold. Cute!

Next up, was something we’d been waiting for and dying to try after hearing so much about it… We finally went for an egg coffee (egg hot chocolate for me), at the super famous Café Giang  (Egg Coffee Lane, “Since 1946”). After all of us filing into the cramped corridor that led to the café and up the stairs trying to find a stool for everyone, Nathan came round and took our orders. For only 25,000 VND (about 80p), we had an AMAZING drink/pudding which tasted like marshmallow crossed with meringue. My god it was so damn good. I know, it sounds terrible, egg coffee/egg hot chocolate. But trust me, if you ever get the opportunity to try it, take it, take two, take it all! 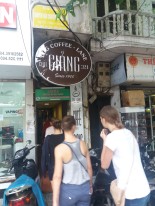 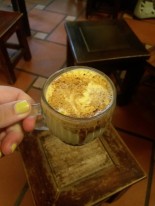 We were sat at a teeny table with a few Canadians who were just starting off their trip and we got chatting to them while we all swiftly finished our drinks. After we’d paid (not the easiest with 30 odd travellers in a very small cramped café), we all then walked around a big indoor market place where we were given about 20 minutes to do our wandering/shopping before meeting up with Nathan again to move on. Alice finally managed to find a present for Prim-Ella and a little Vietnamese hat hanging thing for herself. Not the most cultural place, but handy none the less! We moved from the packed indoor market, to a crazy street food alley where everything looked incredible. If we’d have been on our own I’m pretty sure we would have spent a good while (and a significant amount of money) down there, but being in the group we were kept moving, thankfully!

Nathan led us around and about before taking us back to the sister hostel (Central Backpackers, Old Quarter) where he was going to give out free iced tea and talk through all the tour options, museum info and general Hanoi tourist stuff! Again, how amazing and handy to have that from a hostel! Sadly though, this was our last day in the city so we didn’t stay for the presentation and decided instead to head back towards our own hostel and find some food. We stopped for a bahn mi, obviously, before getting back to the hostel.

In the drizzle, we thought it was best to check out how we would be getting to the airport in the morning (a very sad task indeed). We found an airport shuttle bus that was only a

Back at the hostel we had a bit of a chill, and after getting even more money out, we went on the hunt for something to buy Hannah and Sophie. We managed to find a shirt for Hannah (after sneakily asking her which was nicer, telling her it was for me), and a pencil case for the biology teacher, Miss Sophie Kelly! I got a really cute little bowl for Sam & Dean made from a coconut and egg shells, and a little pouch/bag thing for Sam. Alice treated herself to a beautiful rucksack, ready to get back into student mind-set for uni, and then we NEEDED to stop spending money, so we retreated back to the hostel.

At 5pm we were at the Water Puppet TheatreTheatre  by the lake and being turned away due to it being fully booked. Shit. Slightly frustrated, we bought tickets for the 6:30pm one and went to find the best Bahn Mi in Hanoi at #25. I absolutely love these delicious bread roll things filled with pate, meat, and veggies! They were great, so damn good (after Alice changed hers for one without coriander, weirdo). We sat on the steps outside and finished them before making another quick pit stop at the hostel before making our way back to the Water Puppet Theatre, again.

It was finally happening. After 3 weeks of seeing signs for it, walking past theatres, posters and hearing about it, we were about to experience a Lotus Water Puppet Show first hand! Yaahhhs! (I think Alice was sick of hearing me talk about it to be honest!) Our seats were in the very front row, and next to a girl from the walking tour, that was just the start of the weirdness…

There were musicians and singers on either side of the stage/pool. There were various scenes/props in use and as music was played, and songs were sung, puppets came out from behind the scenery on/in the water and did various things. We had people (with no pants), dragons (with fire and water effects), a phoenix, a unicorn (which looked more like one of the Chinese lion/dog things which were being flung around everywhere), ducks, foxes, farmers, turtles and much more… It was a very surreal, unique experience, and I’m so glad we finally went to see it! It lasted just under an hour and was 100,000vnd (just over £3).

We left feeling pretty happy with ourselves and the crazy things we’d just witnessed, and we even made it back in time for the 2nd half of free beer hour! After the hour was up, we headed to our room to try and pack and sort all our shit out ready for the flight the next day. We were feeling very unmotivated so we chose a Disney playlist to sing along to (much to the annoyance of the other people in our room) to get us going and get the job done…

And that, ladies and gentleman, is how we spent our last 24 hours in Vietnam… Ugh, what a sad sentence to write!

After leaving Vietnam, we spent a few days in Bangkok, seeing everything Bangkok has to offer, all the while with a German dude in tow. Our hostel was great (d-Hostel Bangkok), we had a HUGE thunder storm, another curry, Little India, China Town, insects on sticks, massive beers, temples, card games, giant lizards and some crazy markets. All in all, it was a good time, and a nice little change for the end of our time travelling. As we landed back in Manchester (my first time being home in pretty much a year), Hannah and Sophie came to collect us and after hugs, signs, pictures and a drive down the A55, we stopped in for a well-deserved massive breakfast and a loooong overdue catch up, just the 4 of us… it was good to be home. 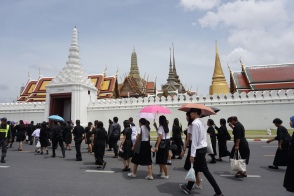 The German bought us dinner…

“Where are you? We landed!” 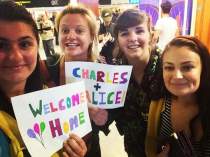 I think our time in Vietnam has been one of my favourite travel experiences so far, and it could be for a number of reasons…

I think after writing up these blogs, which I’ve seriously enjoyed doing, I think I can safely say, it was an amazing perfect mix of them all, and of course, the experiences we had and the awesome people we met along the way. We were incredibly lucky to not run into any troubles, problems or, much bad weather! So, thank you Alice for being the one to stick with me on our travels through life and different countries, despite my general awkward persona and inept abilities! 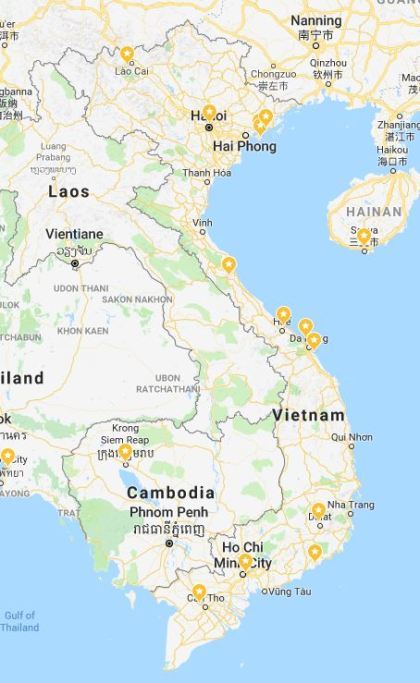