The day had come… our final morning, our final walk to the bakery (just to find out it was closed), our final trip to Burger King…

A day Kyle was not quite ready to see. “This is so sad, I don’t want to leave! Is it always like this when you travel?!” Answer: yes and no. Yes I’m always sad to leave somewhere that I’ve only been able to scratch the surface of, but also, I’m [mostly] always ready to move on to the next place and see what else is out there. As much as I’d loved Tokyo and had had an amazing time, I was definitely ready to get on a plane and explore somewhere new. Before we could do that however, we had the majority of the day left, and after we’d packed up, checked out and put our bags at reception, we headed on over the bridge to walk around the big market area by the temple in Asakusa which we’d seen on the first day.

A guy who spoke very good English offered us a ride in his cart thing that they pull and run with (like a horse drawn carriage, but drawn by one poor bloke), he promised to show us the sights of the “oldest streets in Tokyo”, and as tempting as that sounded, and amazing as it would have been, we couldn’t warrant spending 2000 Japanese Yen each on it. (Roughly about £15, and I know that doesn’t sound a lot, but we were only half way through our travels and already spending more than we’d expected). So, we sadly turned him down and walked down the crazy busy market stall street all the way to the end gates. 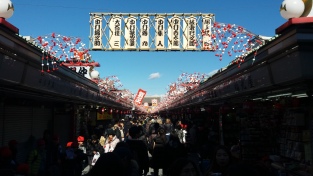 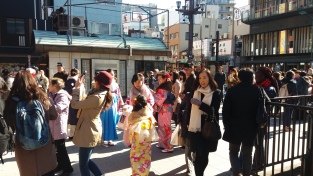 We noticed a sign for an observation deck and made out way into the tourist information centre to see what it was about. It wasn’t that high, but it was pretty cool. There was a big outdoor area to look over Asakusa, the Sky Tree and the market, and then there was a cute little café were we were able to sit facing the window and watch the world go by (with a cuppa obviously, although they seem to favour Earl Grey here which Kyle was not a fan of).

Anyway, we sat there admiring the view for a bit and at 1pm we went back to the little shop on the corner to collect the prints from our disposable camera. They didn’t turn out great I’m not going to lie… most were too dark (if not just black), and the prints were really flat unfortunately, but hey-ho, it was fun to have one, and handy for Kyle as his phone kept running out of space or battery. 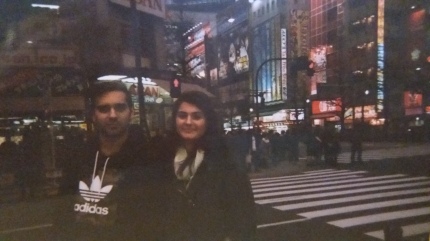 After looking through them and putting them in my bag, we decided it was about time we got the metro to the Tokyo stop!

[To get to the exit we needed from the metro stop, we had to walk through an underground gallery which had photographs running down both sides of the huge corridor. They were photographs of different train stations all over the world.]

We got off and headed towards what we thought was just going to be a park (from looking at the maps), but it actually turned out to be some kind of Imperial/Royal palace thing with a moat, gardens and loads of buildings. We finally found where to get in, were given an entrance card/ticket (free of charge), and we spent a good long while walking around, reading about the history, taking lots of photos and exploring the area.

As we left we handed in our ticket thing and walked down the street along the walls and made our way back to the metro.

The next [and final] place on our list was Ikebukuro, somewhere (as always on this trip) I didn’t really know anything about, but Kyle had a few places in mind he’d like us to try and find.
This was another standard Tokyo place with huge buildings, loads of figurine and game places and lots of people. We found one building that had about 6 or 8 different floors, and was just full of games. Every game you can imagine. The first 2 were the kind of claw-grabber games, with so much stuff inside ranging from t-shirts, to figurines, to bags, to electronics etc. There was a whole floor of music games where you could compete playing the drums, guitars, pianos, DJ decks, and pretty much anything else. It was insane how good some of the people were, we just walked around and stared in awe of them and their gaming talent. Then there were floors with interactive card games, fantasy world games, and I’m sure Kyle could tell you all much more about the specifics here! 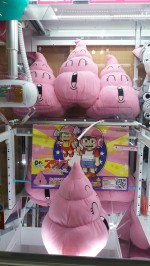 After going onto every floor, and spending a good amount of time gawking at the players, we headed back out onto the darkening streets in search of….

Again… as cool as this was, it was definitely more interesting for Kyle than me. There was every type of merchandise, in loads of different designs and styles, something to cater for everyone. We spent a good long while looking around, picking up bits, putting them back down, getting distracted by other things, and eventually picking out a couple of things for Kyle to buy. The prices were pretty steep and a bit all over the place, I came away empty handed.

Some kind of pipes and wiring system under water…

At this point, I was starting to flag, get tired, and ultimately, a wee bit hangry. I was ready for bed, and somewhere new… As I’ve said, I really enjoyed Tokyo, I really did, it was crazy and busy and like nowhere else I’ve ever been, but, it was starting to feel a bit samey. 6 days is a long time to be in one place, one city at least… I was craving something/somewhere new.

Kyle had heard of a famous ramen place [Ichiran Ramen]that, after a quick internet search, we found out had a restaurant in the area. We followed the blue line on the maps app and came to a cute little, very traditional looking shop front. We went in and found ourselves in a little room with two doorways covered by curtains, a light-up seating plan in the middle and an ordering machine. We were honestly a bit confused and stood there awkwardly for a while, until we eventually went through (ticket in hand) and behind the left side curtain. It was a really cool little place where the seats were individual and facing the centre area which was blocked off and was where the staff were. We took two seats on the left, hung up out coats and bags etc. behind us, and through a hatch type thing, we were handed a tick-off menu. The whole point of these places are to minimise, or even cut out human interaction completely. You check the seating plan yourself, sit down in your single little booth, get handed a menu, you order your own food on a slip, hand it through the slot, and then a little barrier comes down and is only opened to pass your food through. Pretty cool ey! We ordered the traditional ramen with soup, adding in a few extras like mushrooms, egg, meat, onions, garlic and sauce. We sat in silence and ate until we were stuffed. If you finished and wanted more, all you had to do was press a button and they would cater to your needs; whether that be more soup, noodles or a drink. It was a pretty unique and very Japanese experience, and the food was obviously great!!

Some weird hotel we walked past

After we were both satisfied, we had another wander around before heading back on the metro to go and collect our bags from the hostel. We handed it our token and took our bags with us, saying farewell and thank you to Oak Hostel Fuji and its staff. It did us well, and was everything we could have needed, definitely one of the top 3 places I’ve stayed! On the way to the train/metro, we stopped on a bench on the corner and treated ourselves to an ice-cream. Our flight was at stupid o’clock in the morning (about 2am) so we caught the last train to the airport but were still too early to check-in, so we sat and had a drink and some snacks before going in through security etc. (Talking about security, I got seriously searched on this one, I’m talking shoes off, man-handled, through the scanner a number of times and even the special one where you have to stand with your hands above your head.) We lucked out in the fact that not too far from our gate there were 2 recliner chairs with plugs, privacy and a view of the planes… we took them as our own, charged up our devices, read, and napped. We finally went through the gate and found our seats on the plane, and so began part 2 of our Chinese New Year travel adventures…