[PHOTO: A page from my sketch book that I did while playing around with watercolour back in Dulwich]

Yes, this is week 3 of working at the school… how has that happened? Ok so Week 1 only consisted of 2 days, and Week 3 ended on Wednesday (yesterday), but still, this year is going to fly by. I left the UK 22 days ago, which also means, it’s been 22 days since I had a cup of tea… That is NOT OKAY. Once I’ve typed this up though I am going to head to the nearest coffee shop and see what I can do to change the lack of tea in my life.

This week was only 3 days long because it is Mid-Autumn Moon Festival here in China, the festival that celebrates and remembers a woman who was sent to the moon by her lover and she lived out the rest of her life there with a rabbit. No joke. It is celebrated by eating “moon-cakes”, which are not as fun as they sound. But, I’m in China, so I must respect and accept their culture and festivals, plus, anything that changes a 5 day week to a 3 day week is ok by me!

Last night I was introduced to a new kindergarten teacher, Danielle. She’s having to crash in Kim’s spare room at the moment because her apartment contract fell through due to the fact her landlord refused to provide her with working AC, which, let me tell you, is no luxury here, it’s a daily necessity. The rough average temperature has been about 33/35’C, and obviously, being in a sub-tropical climate, it’s humid as hell. I think I’m slowly getting used to it though, I’ll never like it, but I’m learning how to cope. But yeah, so Danielle seems lovely, and as much as I get on with Kim, it was the boost and revival I needed having another person in the mix. I was having a bit of a meh day yesterday that being one-on-one with people just seemed overly tiring. The 3 of us headed out for an Italian and it was really nice, her husband is coming over to join her in a few weeks so not sure how much we’ll see of her once he arrives! She’s mid 30’s; Kim is late 20’s, and me? I’m the baby.

Even though it’s been a very short week, it has been soooo tiring. I had to go into school for a few hours Sunday night to introduce myself and what I will be doing with the students to the parents, for both 502 and 512.

The only picture I have of me and Kim, taken after I’d paid a few visits to the all you can drink bar Saturday night… 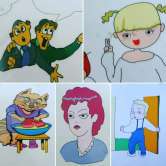 Monday we had flag raising ceremony at 7.45am, so I was out the house by 7am. Kim invited me to hers for lunch, so I accepted, which meant I didn’t go back to my place at all during the couple of hours break. After school I decided to stay behind and get as much work done as I could so I could just curl up on the (wooden) sofa when I got home. At about 7pm, I had a phone call from Kim in a right state.

“Hey Charlie, um, could you come over? Like, right now?”

“Hey Kim yeah course what’s up? Is everything alright?”

And then her phone cut out… so, panic stations it was as I packed up all my stuff as quick as I could and headed to the bus stop praying that I wouldn’t have to wait the usual 15/20 minutes. To my luck, and Kim’s, the right bus turned up just as I arrived at the stop. Kim was messaging me frantically saying her dog has gone crazy and she thinks something has happened to him, there’s blood everywhere, and she doesn’t know what to do. Right. What the bloody hell am I to do?! Obviously I was going straight over to help wherever I could, but Jesus. The things going through my head were he’d somehow poisoned himself by getting into cleaning or bug killing chemicals. I remembered a time dad had to make one of the dogs sick and he did so by making a concoction of liquid in a big 2lt bottle and literally forcing it down the dog’s throat. I’d be okay doing that to one of our dogs, I know our dogs. But this dog, Chance is his name; he’s got a lot of issues so I would not feel safe doing such a thing to an unstable dog I am not familiar with.

Anyway, when I arrived at her place, thankfully my concerns had been waaay off the mark. He had not consumed any chemicals that she knew of. What he’d done, was just mentally attack a totally inanimate object. Take a look at the pictures.

After the clean up…

This fridge was 2 days old, and Chance somehow managed to get to the back of it, and for who knows what reason, ripped it to crap. In the process, he’d cut his gums and jowls, and ripped his claws to shreds (hence the blood). Meanwhile, Bella, Kim’s other dog, much smaller, was just chilling on the sofa loving life. Kim was in that limbo place where you’re not sure whether to manically laugh or break down in tears. I think if I hadn’t of come over, it would have 100% been the latter. Although I had been internally freaking out on the way not having a clue what I was going to be walking into, full knowing I had to be the calm and collected logical thinking one in this situation, I think I helped calm her down. Me and Kim share the same realtor, that’s how we met (officially), one of the guys who has helped us both is a 22 year old sweet Chinese guy we’ve called Shawn. Thankfully, Kim had bumped into Shawn on the way home and invited him up for a cold drink or some food, so, he was there when she opened the door to the shit-show that was now her apartment. “I don’t know who I scared more, Shawn or the dog!” she said to me when explaining how she first reacted. When I arrived Shawn was on the phone to the fridge company asking them to come over and check out the damage, see if Chance could have got into the chemicals or anything, and Kim was busy brushing up and wiping off the blood. Like I said, it was bad.

So, the three of us sat there for a couple of hours trying to calm Chance, and keep Bella busy and away from her messed up brother. Unfortunately, because it was so late, the fridge company wouldn’t send anyone over. I had a look at the back of the fridge and inside, and as far as I could see (I mean I’m no fridge expert but) he hadn’t caused any actual damage to the machine, or got into the dangerous stuff. So, as far as we could tell, the damage to Chance and to the fridge was superficial, and non-serious. Chance’s mental issues on the other hand, not good. So, after we calmed him down as best we could, we put him in his cage with a blanket over it, and we headed out for food. By the time I got home, it was 11pm, and, as I mentioned earlier, I left at 7am that morning. So, 16 hours later, I finally returned home and fell into bed. So, how was your Monday?!

Tuesday morning I remembered that in amongst the little “China Survival Cards” Hannah had given me, was one labelled: “When you get back to China after the summer….” Which I hadn’t opened yet!  It was a sweet little pick me up that made me laugh and I very much needed after the eventful previous evening. Tuesday was fine; I can’t really remember it so it must have been okay. 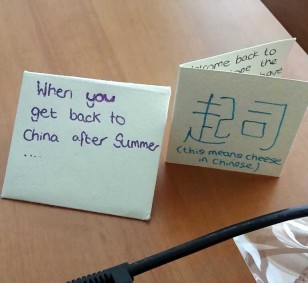 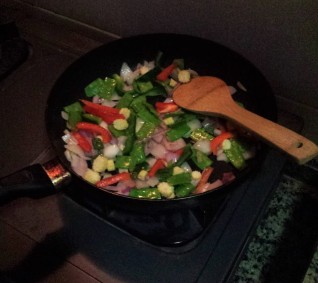 I finally did a proper shop for loads of veg, some seasoning, a chopping board, a big knife, a strainer, some noodle nests, etc. Meaning, when I got home at 7.30pm, I spent the rest of my evening in the kitchen chopping and boxing meal sized portions of veg. Tuesday 13th September marked the first day I made an actual meal in my apartment in Country Garden, and it was pretty good! I ate it with the chopsticks dad had made me while watching my Russell Howard DVD. Pretty perfect.

I was given a jar of Rose Jam yesterday before I left work from 502’s homeroom teacher who had asked one of the students to help her practice saying “Here is some rose jam I made for you.” I know I’ve said it before, but I really did strike gold with the teachers I’m working with. So now I have a jar of honey and a jar of rose jam, and nothing to eat them with. I may have to break through the great firewall of Chinese internet and find some suggestions online. It can be on my to-do list for the next couple of days off work. I would have loved to gone away somewhere, make full use of this travelling opportunity I’ve found myself in again. Yet, due to the fact I don’t get my first paycheque until mid/end of October, I can’t really afford to be jetting off anywhere for 2 days. Plus, I actually can’t leave the country yet (visa issues which will hopefully be resolved by this time next week), and travelling in China on a public holiday would be the stupidest mistake I’d make since I tried drinking a cup of tea while lying down. I’m hopefully going to go explore and find the nearest shopping mall with Kim tomorrow, if I don’t find some nail-varnish-remover soon I swear to God I am going to rip the stuff off my nails myself. Saturday I’ll head to the big street market again and stock up on veg for the week’s meals, and Sunday? Well, Sunday I’m back in work teaching a Thursday timetable which means I also have a meeting from 6.30-8.30pm. The joys of the Chinese schooling system…

So, let me wrap up this post by saying; I’m doing ok. I’m enjoying work, I’ve got some great students, I’ve got incredible co-teachers, and I think when everyone is settled more, I’ll have a good group of friends. It’s going to be no Suzhou life, but I can make it work. As long as I find out where to get some bloody tea…