[PHOTO: CAERARFON CASTEL ON MY BIRTHDAY]

So, I’m back in China. Not that it feels like I’m returning to anything I knew before. There is no Dulwich bus picking me up at 7.20am every morning. No AMC office for my desk to be in. No Times City with Candice only a few apartment blocks away. No Edward, no Leah, no Emily, no Shelby visits, no sharing an apartment with mum and watching a crap load of TV series…

No. What I’ve come to is not anything I knew before. There is no comfort of my past life and year here. Not yet anyway. The past couple of days (yes only couple, I landed Thursday evening and its only Saturday right now) have been a test of my strength and willingness already. I have had to constantly remind myself of what was embossed onto the card Sam so secretively snuck into my rucksack…

As corny as it sounds, and as much as it pains me to admit this, I’ve already been struggling, just with the amount that has been thrown at me already. I came here after my beautiful and jam packed 5 weeks at home, to spend a few days training with others, and then I would be moved into my new home in Foshan, and taken to my kindergarten to get used to it all before meeting my class. As my family and friends know, THIS HAS NOT HAPPENED.

I was supposed to be met at the airport by Kimmie, the lovely lady who has been in contact with me ever since my interview process and who has helped me sort everything out including sending my boxes down from Suzhou and applying for my visa etc etc. Instead, I was greeted by poor Carry (male) who sadly had been waiting for 2 hours, due to the absolutely HUGE queues I had to wait in for passport control and even just to leave the aircraft. So me and Carry left Guangzhou airport at about 7pm (I landed at about 5pm), and out into the 35’C humidity that Southern China had so promised me. We hailed a taxi (back to summing it, no private cars like Dulwich) and after an hour we pulled up outside the hotel which I was to be staying at for the next 3-5 days (again, not very clear on this one). Their promised room at a rate of 130rmb was not available. So, I had to pay for the upgrade to 160rmb, yes I get reimbursed, and it’s only roughly £16, but still… come on guys…

So I checked in, headed up to my room (608) and well and truly crashed. I had a much needed shower, and snuggled up in bed (as snuggly as you can get on what feels like a mattress made of slate) and stuck on a film. Thursday night, my first night of my next year in China, I sat in bed eating noodles watching an American comedy DVD bought from a fake DVD shop in Suzhou.

So, not so bad right? Well, bare with me here…Carry met me after I’d eaten a measly 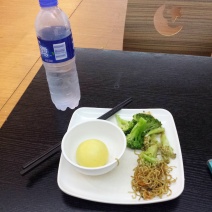 portion of the free breakfast buffet (see photo), and we headed onto the metro to go and get a photo taken for my visa/medical, and open up a new Chinese bank account for me (my new card has a monkey on it, that’s one thing in my favour!). We arrived at the company headquarters that hired me, and I was finally introduced to Kimmie. She sat with me for a while and then handed over a big stack of papers for me to read through and sign… contacts and T&Cs galore. Before I came to the signing part, Kimmie had some news to break to me, but she dropped it in the conversation as casual as you would ask if someone could pass you a pen.

“So the Kindergarten you were to go to doesn’t need a 3rd teacher, so we’re going to send you to a different place, maybe in _________ [aka. The prostitute capital of China].”

Errrm… back up Kimmie, I’m sorry WHAT?! Yep you heard it right, they gave my position away and without asking me, or consulting with me, were just going to send me off to a different city. I explained to Kimmie that I came across the globe to go and work in Foshan, I had done a lot of research on it, and that’s what I had agreed to. So, she was back to the drawing board, looking a little shocked that I had refused this new placement. I was then introduced to David, one of the members of the Teaching team, and he showed me a PPT, and then sat me down in front of a laptop for an hour while I watched 2 lessons and made notes. When David returned, he explained that there is a position in Foshan he thinks would be good for me, however, it isn’t a kindergarten teacher, as promised, it is for a High School Oral English Teacher at Guangdong Country Garden School… No pressure. I was then told to head back to the hotel (on my own after being led by Carry earlier that day via 2 shops), and write up a lesson plan on the topic of Food.

Back to the hotel I went, via 2 metro lines (that is the way, I didn’t just get lost) all for 3rmb (about 30p), and I found one of the lovely “Muslim Restaurants” right next door to my hotel. PERFECT after a slightly overwhelming first day. So, it was a movie in bed, and then working on my lesson plan while, shamefully, Frozen was on in the background… (Oh, I forgot to add, I was also locked out of my room due to the fact that I had only paid for one night despite being checked in until further notice so had to try and sign language the situation with the non-English speaking front desk.)

This morning, up again for slightly more noodles for breakfast this time, and out into the humidity and heat to make my way over to HQ. To my dismay, the AC was off in the whole building apart from the lobby due to the fact that it costs over double the normal price to run it on weekends in that building compared to the rest of the week. I was asked to present/run my class from my lesson plan with only 2 fully grown Chinese guys who also work for the company (their English was exceptional, but, not the best way to get a feel for how the lesson would go in a real classroom situation). I was given some feedback and notes to improve upon, and thankfully, a lot of positive comments too, one being; I was naturally smiley rather than creepy Cheshire cat smiley, which was nice to hear! David returned from visiting, what turned out to be the school I was being sent to, and informed me that my medical on Monday will now be postponed, and on Monday he will go with me to the school in Foshan, where I will be interviewed/viewed via performing and teaching my lesson to a real class… So, basically, I’ve spent my whole day preparing and planning this one lesson, making a PowerPoint presentation, and rehearsing it out loud in my hotel room. Tomorrow will be a full day of exactly the same; I think they will make me do the class at least 5 times tomorrow, with feedback and tweaks in-between.

I must admit, this isn’t what I had expected. This isn’t what I signed on for, or what I was prepared to do. BUT. I’m not one to walk away from something, no matter how hard or challenging it may be. I guess it’s my own fault for muttering those fateful words:

“I just need a challenge”

So here I am, in Guangzhou, preparing to teach teenagers High School Oral English in Foshan. I know no one here. I don’t know where I will be living or what it will be like. I don’t even know if I’m going to get this position. If not…then, well… it’s goodbye Foshan, hello another random city in the Guangdong province of Southern China.

One thought on “5 weeks go by pretty quick…”