“Plans are there to be changed”

– another wise phrase from my ever logical and chilled out father.

I was awoken today, on our 6th morning in Thailand, to Shelby asking me to go to the pharmacy for her. Poor girl had been up ill for hours and could no longer take it without some medical help. I shot up, threw on a change of clothes and headed out into the rain. Yes the rain. We’ve been at Patong Beach, Phuket for 3 nights, and we’ve only seen a few patches of blue sky… until today, typical. There have been some epic sea storms sweeping across the party town of Patong the last few days, but it doesn’t make for great beach weather. I’m at serious risk of being to Thailand twice, and never making into the ocean… Today, the day we aimed to leave, but have been forced to stay (through no fault of Shelby), the sun has made a slight appearance through the grey clouds.It’s not all doom and gloom though. Our trip so far has been great. The last few days have been about relaxing, reading, and, yes, partying the night away on the infamous Bangla Road. Prior to that, our time in Chiang Mai was filled with wandering the streets of old town, walking the moat, stumbling upon gold temples, and, the most incredible of all, a day caring for elephants. 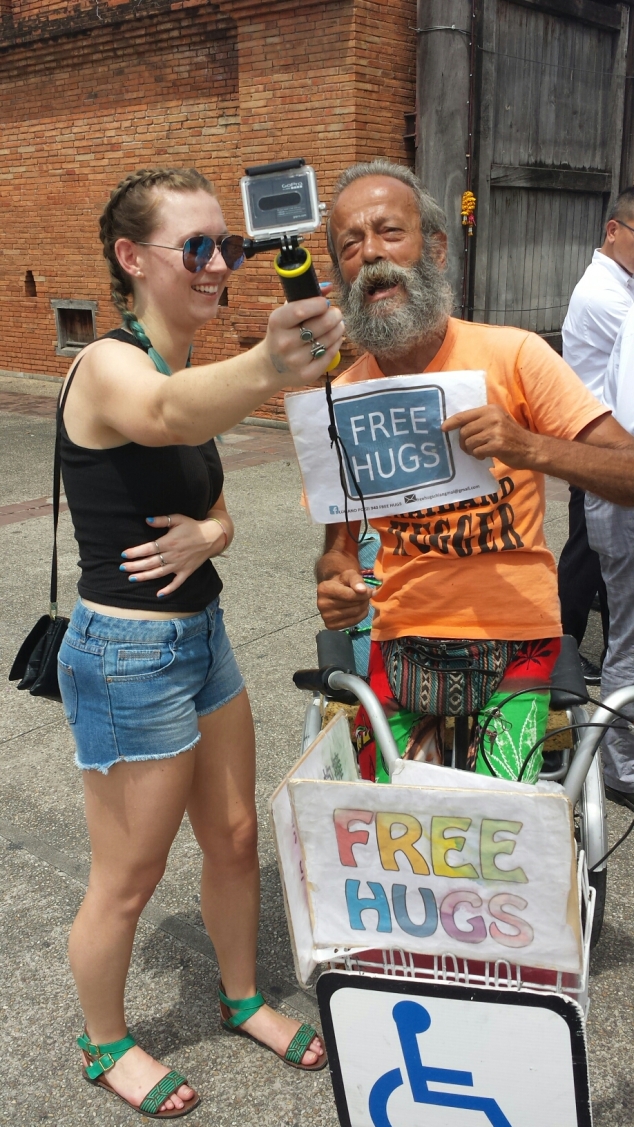 A generous, lovely, and entertaining Italian guy singing a song for Shelby after she received her free huh

Surprisingly enough, this was the day we burnt…

One of many insanely gold and sparkly temples we stumbled upon

A small part of the city walls

One of the giant night markets

On Monday we headed to Elephant Nature Park, just outside the city of Chiang Mai with 6 other girls and 1 guy, and our guide Banda. I won’t go into too much detail, but we were shown a video during the bus ride over to the park, and it was heartbreaking. They showed us “behind the scenes” of training a baby elephant. Their only aim during this horrific and dangerous month long process is to “break the soul of the elephant, make it fear man, and to make it forget it’s mother.” A sharp hook is used to keep the elephant in line after they have been sent to either the illigal logging industry, entertainment centers, breeding companies or riding events. We met one sweet giant who had a hole in her ear where the trainer used the hook so much it made a puncture wound. Her new mahout (official name for an elephant trainer/carer) didn’t like to look at the hole in her ear, so each day he puts a new fresh flower there instead. The Mahout have such a special bond with these lovely, previously abused animals. There are 70 elephants at Elephant Nature Park, and each one has their own Mahout who has been with them since the day they arrived into the parks care. Between the 9 of us there were 4 elephants who we were going to look after for the day. The oldest of which was 70 years old and was blind in one eye (due to old age thankfully). Me and Shelby spent most of our time with Camoon, easily distinguishable by her large forehead and a slight damaged dent in her trunk. She was also huge and ever so sassy. We spent the day walking with her through the Thai forest, feeding her watermelon, sugar cane and cucumber. We were then fortunate enough to experience something else incredible. We were sent into the river with these 4 imense animals, given buckets and told to wash them. However, they  needed no help. They were like naughty cheeky toddlers or puppies, rolling around, squirting water at each other, and us, and not really paying much attention to their mahout. It was beyond amazing… truly a day and experience I will never forget.

The beautiful gentle giant that was Camoon.

A whole basket of watermelon for the old lady to start the day. 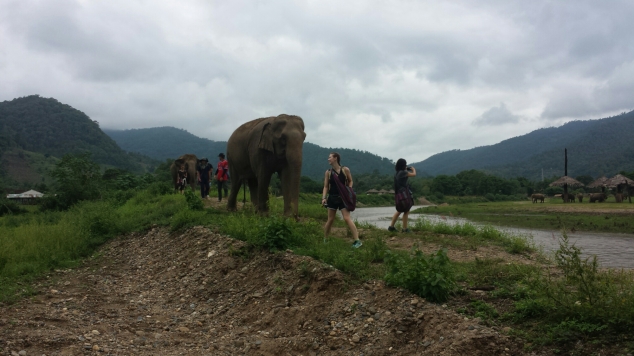 You can see the flower in her ear here.

We’ve met a lot of people so far, that is the travellers way right? A lot of Germans, not surprisingly, and a fair few America’s and a spattering of other nationalities. We seem to have the most structured travel plans of anyone we’ve met. Everyone else seems to just do the whole; we’ll see how we like it, then move on when ready. Which is great! But we don’t have that luxury. We have hostels and flights booked right up until we land back in our home countries. Which I like. We know how long we have in each place and we have the comfort of knowing we have everything sorted. Until illness takes over. So, we may have lost the money for one flight, bought another, and payed for another night of a hostel here, but health comes first. And there was no way Shelby could have dragged herself onto a plane today. Fingers crossed for tomorrow…

I’m currently sat in the communal area of LUPTA Hostel, where we’ve checked in for our 4th night, eating friend rice (you can take the girl out of China…), and about to continue reading The Beach by Alex Garland. I’ve watched and loved the film many times, but as I finished my book in Chiang Mai airport, I had to pick up a new one, and a story about an adventure in Thailand seemed as good a book as any to pick…

“Escape through travel works. Almost from the moment I boarded my flight, life in England became meaningless. Seat-belt signs lit up, problems switched off. Broken armrests took precedence over broken hearts. By the time the plane was airborne if forgotten England even existed.”

Quote from The Beach.

2 thoughts on “Sunshine on a grey day…”